According to Kurt-Erik Nordin, NTM’s CEO, creating and managing the development of the company from its simple agricultural roots has
required a considerable amount of pioneering spirit, creative thinking and belief in the capacity and ability of the company.
Today, NTM is part of a hi-tech engineering industry that engages in continual product development and has an extensive and far-reaching
bank of knowledge in terms of the market-adapted manufacture of transport equipment for road haulage and refuse collection vehicles.
The company has always been renowned for manufacturing high quality products, which are, and continue to be, the cornerstones of our business, says Nordin.

Närpes Trä & Metall was established on 27 April 1950, with Lennart Nordin as the company’s single biggest shareholder.
Three days later, on 1 May, work began on constructing the first factory facility, which covered an area of 636 square metres
and is now home to a number of departments, including product development and sales. 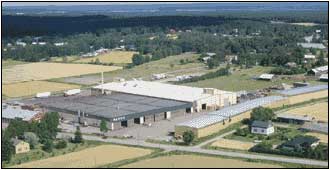 The factory has been extended every ten years, and the total workshop floor space now exceeds 20,000 square metres.

Initially, NTM had a metals department and a timber product manufacturing department.

The company produced a range of items, including kitchen cabinets, furniture (in the mid-1950s, mouldings were made for Närpes
Church and various types of cabinet for Närpes Hospital), wheelbarrows, farm vehicles and radiators.
The company also repaired agricultural equipment. 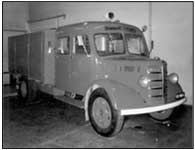 From the outset, coach building has been an important part of the company’s business. The very first vehicle to be built was a fire engine for Övermark Municipality.

NTM was a pioneer in Finland and dominated the market for many years by building refrigeration and freezer vehicles.

The first vehicle left the factory on 20 December 1958 and the first freezer trailer was delivered in 1959.
In-house development led to the construction of trailers from fibreglass, which were tested in France and given international approval in 1978.

Truck bodies have always been one of NTM’s most important products. Initially, trailer floors and walls were only produced in timber and plywood.
By the mid 1950s, these materials were replaced in favour of steel frames and aluminium cladding. In 1968, NTM was the first company in Finland to introduce a self-supporting frame design for goods vehicles.
1976 saw the emergence of the fibreglass body, and in 1977 enclosed bodies were equipped with sides that could be fully opened.
NTM was also the first to introduce this innovation in Finland.

The first refuse collector left NTM in 1975, destined for export to Sweden.

After several phases of development, refuse collectors now represent more than half of the company’s turnover.
Production now extends to the widest range of refuse collectors in Europe.
The vehicles, which have a capacity of between 6 and 35 cubic metres of compressed waste, are also equipped with compartments
for various types of refuse and containers for special waste, all tailored according to customer requirements.
The most modern collectors can empty a bin in less than 10 seconds, whilst the driver sits in the vehicle.
A computer reads the customer chip and determines the weight of waste.

Over the years, NTM has produced many different special vehicles, including vehicle transporters, bulk container tippers, special vehicles for problematic waste and a mobile plastic pipe factory for KWH.

In addition, the company also fabricated its own vehicle axles and fifth wheels from the end of the 1950s and almost all the way through the 1960s.
Some of the biggest-selling products ever produced by the company were roll-on-roll-off (RORO) trailers for use in shipping.
Production began in 1970 and continued until 1986. RORO trailers were sold throughout the world, with a total of around 1,850 units being fabricated, along with a further 200 ‘swan necks’ that were used to lift and pull the trailers.

There has always been a service workshop at NTM.
The workshop became a separate unit in 1986. Almost 500 units per year pass through its doors.
In 1990, the company set up an extensive new on-site testing facility in which just over 300 inspections are performed every year. A large wash was built in 2001.
The company began exporting its products as early as 1961. The first trailer went to SÅIFA in Sweden. Initially, only trailers and vans were exported.
Since then, internationalisation has exploded. NTM’s exports now constitute more than 75% of the company’s total volume and go to Sweden, Norway,
Denmark, Iceland, the UK, Russia, Poland, the Netherlands, Austria and the Baltic States.

NTM has subsidiaries in Sweden, the UK, Estonia, Germany and Poland.
Around 1,200 people have been employed by NTM since it was founded six decades ago.
Over the years, the company has produced more than 15,000 units for road transport and 1,850 units of shipping equipment.